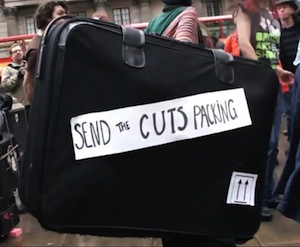 A video diary about the movement against
government spending cuts in the universities and beyond
with students, activists and citizens of the real big society.

With songs by Banner Theatre.

In collaboration with the New Statesman and Roehampton University.

This entry was posted in Announcements, News. Bookmark the permalink.